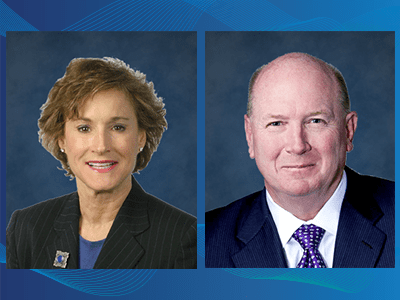 Geospace Technologies has announced the addition of Kenneth Asbury, former President and CEO of CACI International, Inc., and Margaret Sidney “Sid” Ashworth, former Vice President of Government Relations for Northrop Grumman, to its board of directors effective December 1, 2020.

The new directors further support the company’s expansion of its monitoring technologies in the security and surveillance markets served by Quantum Technology Sciences, a U.S. government contractor, and OptoSeis®, a fiber optic sensor technology, both acquired in 2018.

“Geospace is thrilled to add two incredibly seasoned leaders from highly-respected corporations to our board of directors. Ken will bring more than three decades of executive leadership and deep experience in federal government business relations. Sid will offer valuable insight from her more than 25 years of experience in legislative affairs,” said Gary Owens, Geospace Chairman of the Board. “By adding these two new directors, Geospace fortifies its expansion into industries which benefit from our core competency in seismic-acoustic technologies.”

Kenneth Asbury is the former President and Chief Executive Officer of CACI International, Inc., and previously served as President and CEO of Arctic Slope Regional Corporation – Federal Holdings. Prior to each of these roles, he spent the majority of his career at Lockheed Martin serving in various roles including President of three successful operating units and Vice President of capture excellence. Asbury served in the U.S. Army Security Agency as a translator/interpreter. He is a graduate of the University of Oklahoma.

Margaret Sidney Ashworth is the former Vice President of Government Relations for Northrop Grumman Corporation. Previously, she was Vice President of Washington Operations for GE Aviation. Prior to that, she spent 14 years as a professional staff member with the U.S. Senate Committee on Appropriations. For more than a decade, Ashworth worked as a civilian in the Department of the Army, focused on resource management, force structure, and strategy. She earned a master’s degree in business administration from Campbell University and a bachelor’s degree in management from the University of Maryland.

Read the announcement at Geospace Technologies