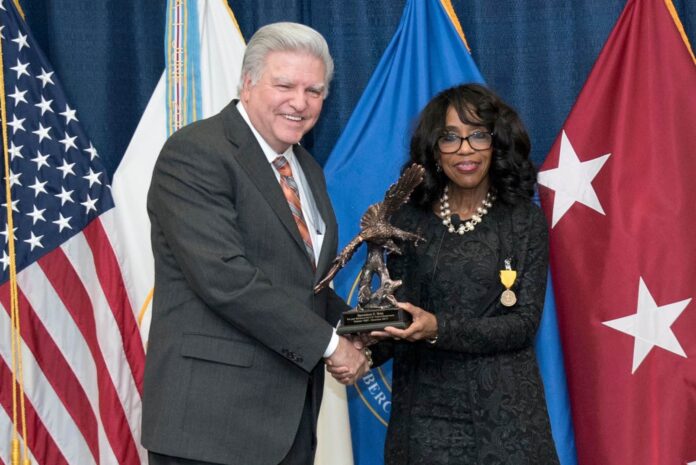 Following a fast-paced, 10-year career with ExxonMobil managing multiple offices including budget, contracting, and computing, Sims restarted her career in 1987 – this time with the federal government.

She took a position with U.S. Army Europe’s 60th Ordnance Group in Zweibruecken, Germany, where her husband was assigned as an Army officer. Her initial intent was to be a full-time mother and return to Exxon after her husband’s three-year tour.

“Being a stay-at-home mom was much too hard, so my husband brought me a SF-171 job application, and 50 pages later, I qualified in 9 series. I still thought I was taking a position with the government as a short-term solution. Like many Army spouses, I needed a position where my husband was stationed,” Sims said. “An automation project officer, a temporary GS-11 position, was open and seemed to be a reasonable option.”

She enjoyed the work, and in a few months designed a wide-area network lauded by U.S Army Europe. She also organized the first-ever information technology expo in Zweibruecken, which was well attended.

Sims was subsequently offered an opportunity to become the director of resource management for the Zweibruecken military community. It was her first permanent government position, a GS-12.

“I enjoyed being back in the accounting field and seeing the impact of my financing efforts on the local community,” she said.

Her intention to stay with the government for only a short period of time quickly changed.

“The DRM job exposed me to both an interesting mission set as well as a professional workforce that cared deeply about what they were doing, which directly benefited the warfighter, so I decided to stay,” she said.

Sims and her multi-national team won hard-fought and greatly needed financial awards for the community.

“This is where I fell in love with public service; I have never regretted making a career as a public servant,” she said.

During her career, Sims also held staff and leadership positions with the Executive Office of the President, Office of Management and Budget (OMB), the White House Military Office, and DISA.

At OMB, she was fascinated by the intersection of the budget and presidential policy, and found the inner workings of department-level budget hearings and deficit monitoring extraordinarily rewarding. White House perks for staff members were also high on her list, she said.

Sims joined the DISA team in September 1994 as a GS-14, and said her time as a GS-15 in the agency’s legacy Strategic Planning and Information Directorate allowed her to highlight her leadership abilities.

“I led and won critical issues for the agency, including an issue that, if lost, could have resulted in DISA’s telecommunications mission being outsourced,” she said.

Sims was selected for the Senior Executive Service in November 2004.

Today, Sims provides executive leadership and oversight for the formulation and execution of an $11 billion dollar budget, which finances critical communications support to the president as well as essential command and control; telecommunications; computing; cyber operations and mission assurance; and other services to the Office of the Secretary of Defense, the military services, Department of Defense agencies, and joint and coalition warfighters worldwide.

“I have also provided direct support to the National Security Council for many years, and contributed to a variety of positive outcomes, such as the complete renovation of the White House Situation Room,” she said.

Sims is proud of the work she has done at DISA, but is quick to recognize that the workforce helped her every step along the way.

“The DISA workforce is as hard working, creative, and mission-driven as you will find anywhere in government,” she said. “I’m proud of building a great team and providing them with an environment that encouraged and rewarded creative solutions that led to numerous accomplishments for DISA, DOD, and national-level leaders.”

One of the accomplishments was delivering a clean audit opinion for DISA’s Working Capital Fund (WCF) and gaining a positive audit opinion on the General Fund during the 2016 audit.

“DISA has been recognized by the Office of the Under Secretary of Defense (Comptroller) as being clearly in the forefront, and [they] hoped other organizations would examine and model their processes after ours,” she said. “Some of our processes are best of breed. For example, my team created mitigating controls where accounting systems have material weaknesses, something that could derail an audit. Instead, my team found ways to build and maintain strong controls throughout the entire accounting process, rather than waiting for systemic solutions, which would have taken years.”

One of her proudest achievements is how she and her team improved DISA’s financial posture.

“We surpassed all measures for our $8 billion WCF, bringing it back into the black ahead of plan,” she said. “As a result, the agency is well positioned for expanded responsibility. Its financial health is sound.”

“Our team drastically improved the major account balances associated with the $8 billion WCF, to include achieving major milestones with cash and unobligated balances, while also reducing rates to customers at a historic pace. On the $3 billion General Fund side, DISA gained a reputation for executing well to meet its critical missions. We also overhauled budget formulation, greatly improving DISA’s ability to present, defend and retain our resources on Capitol Hill and at the Pentagon.”

In addition to her duties as the comptroller and chief financial officer, Sims is also responsible for the agency’s workforce management, which spans human resource activities, including personnel functions, logistics, facilities, and security. She leads a team of more than 800 personnel worldwide.

“We brought new tools onboard to enhance productivity and analysis for the workforce in order to help them improve their processes and workflows, and more are on the way,” she said. “We recently automated the corporate planning process – DISA’s method of balancing the agency’s programs and objectives against resources to develop credible Program Objective Memorandum and Budget Estimate Submission materials. We also established new timelines in order to transform how the agency views and manages the entire hiring process. The security team has been commended for its best practices, and the training team recently won a national award.”

Sims said her team is currently working to develop an accounting system for the WCF, which will become the WCF accounting solution for the entire DOD.

Sims is a Phi Kappa Phi graduate of Louisiana State University, with a bachelor of science degree in accounting. She also holds a master’s degree in national resource strategy from the National Defense University, where she was named a distinguished graduate. She has trained with other corporate and government executives at various institutions, including Harvard University and the Federal Executive Institute. She is a member of the Acquisition Corps, and has earned numerous awards throughout her career, including the Presidential Rank Award.

Sims’ appreciation for the DISA workforce and the other leaders she has been fortunate enough to work with knows no bounds.

“I’d like to thank the civilians, military, and contractors for what they do for DISA across the globe every day. They have focused their talents on advancing combat support with new technologies and know-how to achieve the desired effects that our warfighters need,” she said. “The workforce continues to increase their efficiencies, despite increasing workloads, which permits DISA to offer lower rates to customers. One of the keys for ensuring DISA’s future success will be to ensure we maintain constant improvements in training, quality of life, and other human resource programs to help retain this extraordinary workforce. Investing in our people produces solid returns.”

Sims plans to devote more time to her family, volunteer work, and other interests in retirement.

“I intend to spend a lot of time traveling to see my grandchildren in California. They will be my priority,” she said.