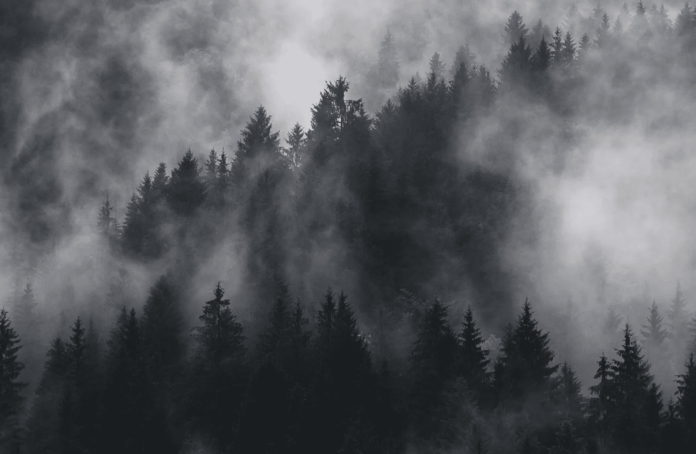 The authors’ research on Telegram – a messaging app known to be a hub for violent extremist propaganda and recruiting – revealed evidence that an eco-fascist movement, known as the “Pine Tree Party,” is rapidly expanding and accelerating their rhetoric online.

This group has also been referred to as the “Pines,” “the Pine Tree community,” “pine tree nationalism,” “pine tree subculture,” and the “Pine Tree Gang” in the past. [[ii]] While most networks active on Telegram are well known to researchers and P/CVE stakeholders in general, there is very little available information regarding the Pine Tree Party. One prior article referencing the Pine Tree Party was published in 2018 by Jake Hanrahan of Wired. [[iii]] The article linked the Pine Tree ideology to that of the Unabomber and suggested the movement took off after the release of the Netflix show Manhunt: Unabomber in 2017, which recounted Ted Kaczynski’s crimes and anti-technology ideology. The piece prompted the response of a Pine Tree Party follower to write an opinion piece on Medium. [[iv]] The Pine Tree Party followers consider the movement to be a recent development within conservativism, not a violent or destructive ideology. [[v]] However, the parallels to the Unabomber’s ideology are also what first alerted and prompted this research on Telegram. Analysis of Pine Tree Party members’ social media activity suggests that the movement is quickly accelerating, recruiting, and pushing the ideological bounds to promote infrastructure damage and violence now directly.

The Pine Tree Party was established on Nov. 3, 2017, through an Instagram post initiated by Mike Ma, also the leader of the movement by some accounts (image 1). Ma posted an image of a pine tree with the caption “THE PINE TREE PARTY// Revealing the flag of my new movement. Rejecting the lowerworld, embracing nature once again.”

Ma is also the author of Harassment Architecture, a 146-page independently published account of Ma’s struggle against the modern world. Ma refers to this enemy in the book as the “lowerworld,” just as he does in the initial Instagram post. While Ma states the book is a work of dark comedy and fiction, the writing reflects the same rhetoric he uses in everyday life speeches and social media posts. In the opening pages Ma admits to being uncomfortable around friends with whom he cannot be his racist and sexist self. [[vi]] Similarly, in the Instagram post revealing the Pine Tree flag, Ma had originally used a longer caption urging his followers to reject centralized government, arm themselves with weapons they can shoot accurately, and “oust illegal immigrants with zero mercy” in order to return to a more natural way of life (the full caption is shown in image 2). The caption has since been shortened to meet moderation standards in order to avoid takedown. 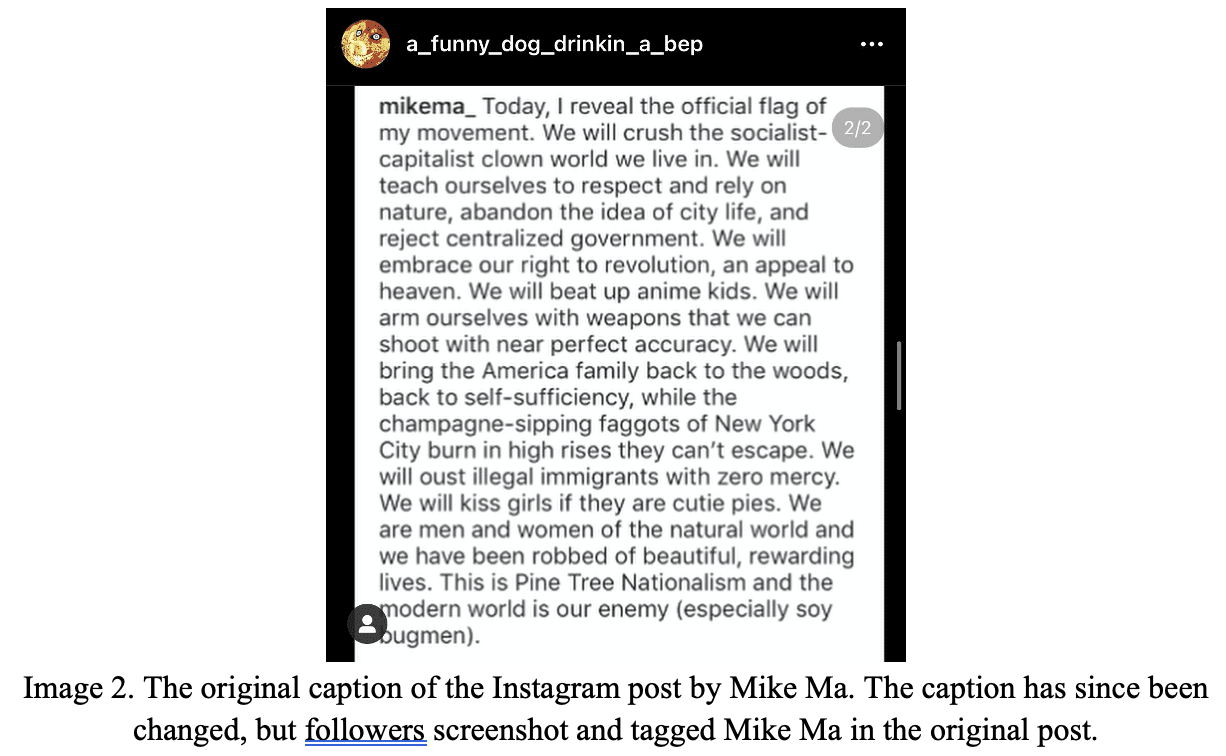 Ma views the Pine Tree Party as a movement that promotes individuals to become more self-sufficient and get back to nature in order to escape the grasps of government control. Ma also has stated his ideal form of government would be “no government… that would require a way smaller population.” [[vii]] At the roots of eco-fascism is the belief that in order to restore a higher natural order, the human population must be reduced dramatically, even if that means through excessive violence. [[viii]] The eco-fascist thought sees the environment as essential to the furthering of the white race and the technology of the modern world, and a world where “inferior” races are the enemy.

While environmental protection policies are generally associated with the left in the United States, environmental advocacy does have a place in the far-right narrative as well. Recent work by Alex Amend at Political Research Associated (2020) noted that far-right networks continue to adopt the views of eco-fascist thinkers, most notably Pentii Linkola, a Finnish writer and ecologist who passed away this year. [[ix]] Linkola is often praised for his humble way of life and a “clear” solution to end environmental and cultural destruction. Linkola’s personal website has proposed a four-step ideal plan to further the eco-fascist movement: no immigration, population downsize, defectives killed, and stopping of rampant technology. [[x]] Linkola is often discussed and quoted in many of the major far-right channels active on Telegram.[xi]

The combination of white supremacist views with ecological thought are again gaining momentum in far-right networks globally. Mike Ma and his Pine Tree community exhibit a preference for no government, in addition to the desire to oust immigrants, creating a unique mix of environmentalism, anti-government ideals, and white supremacy – a combination that reflects eco-fascist ideals. Further, the pine tree symbol has historical connections to the American Revolution and has developed into a symbol of resistance since the colonization and independence era. The same slogan that Ma used on his flag – “An Appeal to Heaven” – was also used on the flags during the Revolution. [[xii]]

These eco-fascist sentiments are not just hinted to in his book but have now progressed over the past three years into outright calls for violence in the Pine Tree Party Telegram Channel. The Pine Tree Party Telegram channel was created on Aug. 20, 2020. While the admins’ real names are not shown on Telegram and thus it cannot be confirmed if Mike Ma is running the channel, the first message sent in the channel was an image of a dark figure holding a bomb – the same image found on the cover of Mike Ma’s book (image 3). One of the most overt propaganda pieces included an image of a masked man holding a gun with the writing “No Political Solution.” The caption on the image read, “The soundtrack of a dying people, on repeat until the last whisper. Have many children, teach them to be extremists. Lead by example. They will call this hatespeech, and they will be right (image 4).” The admin of the page was making direct calls for radicalization and to raise future extremists to help the eco-fascist cause. Further, the admin is aware of the extremist rhetoric and only continues to escalate the propaganda. 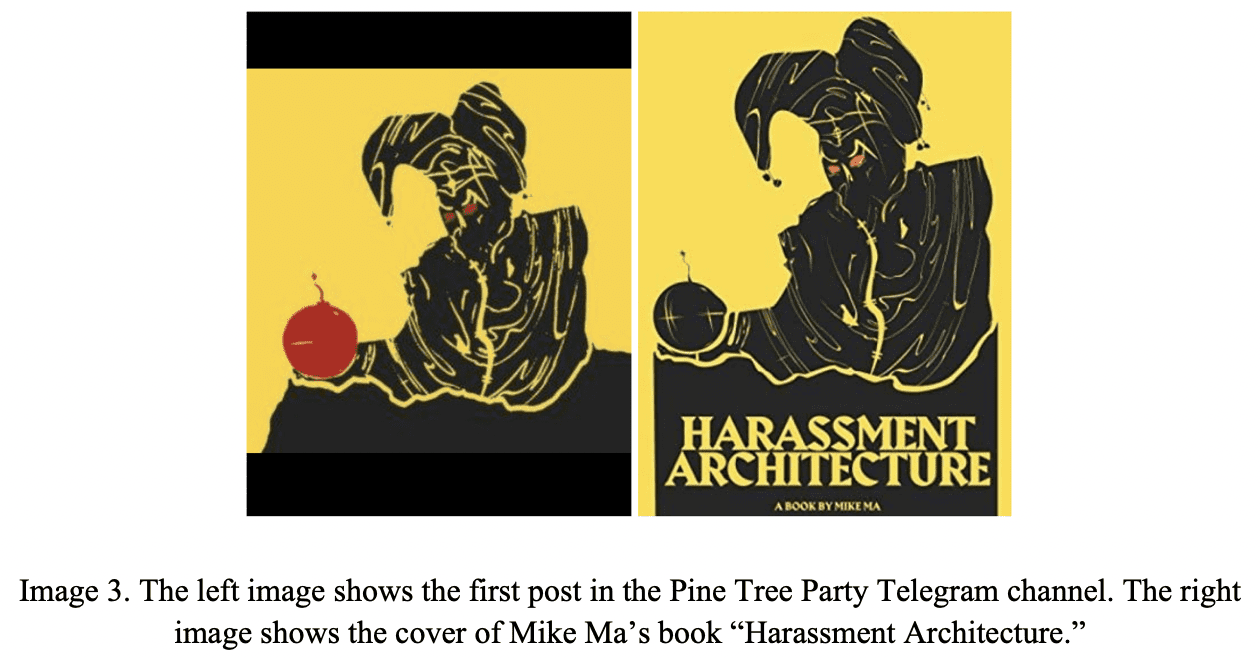 Several images of burning flags and buildings include quotes from Mike Ma himself, Adolf Hitler, Savitri Devi, and Oswald Mosley. Several more include direct quotes from Ted Kaczynski (image 4). In addition to sympathizing with Ted Kaczynski, the propaganda pieces have also quoted the infamous “War of the Flea: The Classic Study of Guerilla Warfare” by Robert Taber. “War of the Flea” analyzed patterns in guerilla warfare tactics across a number of conflicts. Similar to other eco-fascist movements, the Pine Tree Party has also begun to express elements of Nazism symbology, most recently including the 14/88 symbol in a meme and many images with the Algiz Rune and the Black Sun symbols. The admin also continually calls on followers to surround themselves with their men, to train, and to be prepared for an inevitable call to action (image 4). The Pine Tree Party is becoming more aggressive in its rhetoric, which should be concerning when considering the rapid growth that the movement is currently experiencing. 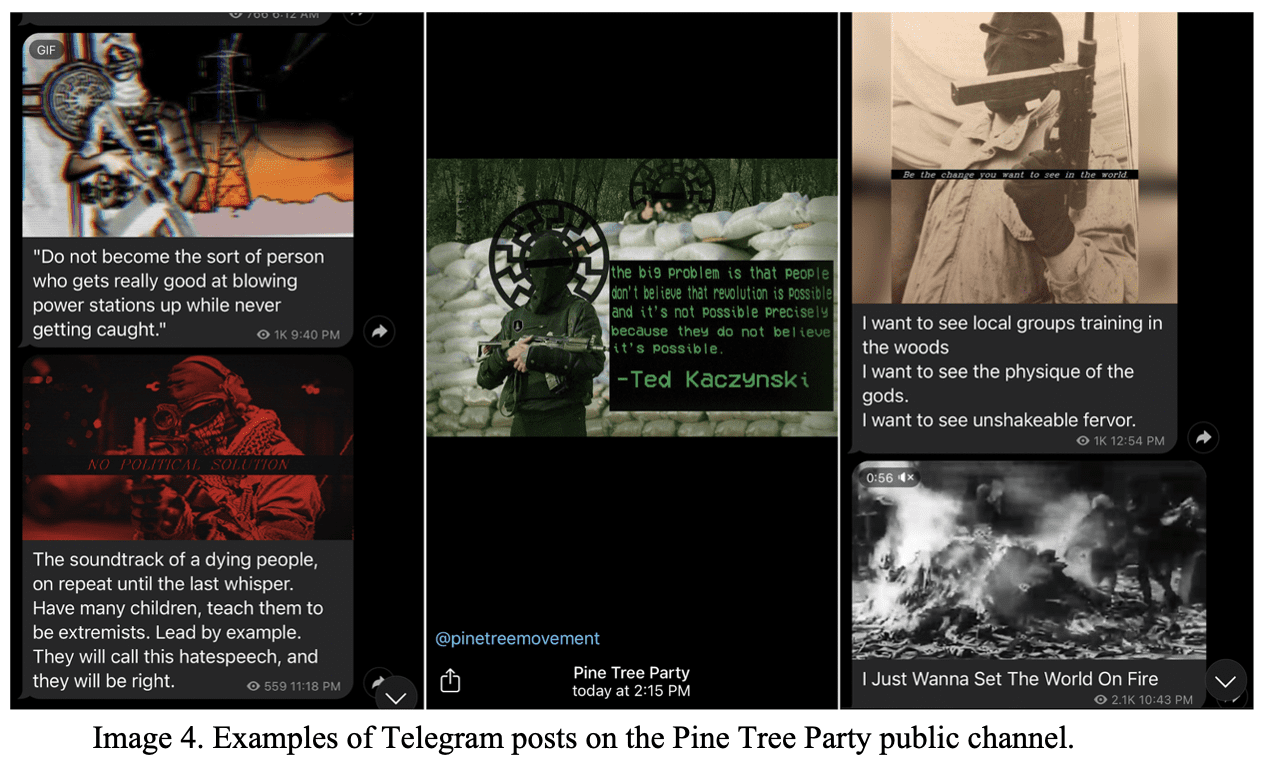 Since Aug. 20, the public channel has gained 1,318 subscribers and continues to grow daily. In just a one-week period, the Pine Tree Telegram channel has gained another hundred followers and continues to grow at a rapid pace. While it is unclear how many followers Mike Ma had on Instagram before establishing the Pine Tree Party, his account has now grown to 20k followers, with thousands interacting on each post. The Pine Tree Party posts have been reshared across a number of the major far-right VE Telegram channels. The group is beginning to influence the network of far-right online activity. Further, the Pine Tree Party has been seen across a range of other social media platforms, including iFunny, Twitter, and Instagram, with a well-connected following on each platform. Mike Ma even has a public T-shirt store available on the TeeSpring website.

While eco-fascism has not been considered as much of a domestic security threat compared to alt-right and neo-Nazi movements, it should not be understated that its influence has inspired several recent major attacks globally. Accused El Paso Walmart shooter Patrick Crusius, New Zealand mosque shooter Brenton Tarrant, and Anders Breivik, who conducted the 2011 bomb and gun attacks in Norway, all espoused eco-fascist sentiments in their manifestos and online records. While it would be reckless to suggest that every follower of the Pine Tree Party is promoting destruction and violence, the propaganda and messages being created and pushed by the movement’s leaders warrant attention. The thinkers and authors who continue to influence the eco-fascist movement have repeatedly proposed genocides, killings, and attacks against immigrants and those they view as “inferior races.” The movement sympathizes with past terrorists such as Kaczynski, Crusius, Tarrant, and Breivik. Followers of the Pine Tree movement believe these perpetrators were justified in their actions and continue to encourage others to commit similar acts.

Anders Breivik, who took large chunks directly from Ted Kaczynski’s manifesto to use in his own, later inspired Brenton Tarrant, who then inspired Patrick Crusius. With each attack, the eco-fascist movement continues to promote further acceleration under the guise of saving the white race and the environment. As was also made pressingly clear in the article by Alex Amend at Political Research Associates (2020), there is a clear chain of influence and accelerationism that must be broken. [[xiii]] The movement has now reached a turning point toward promoting a violent ideology where followers are encouraged to train and take part in guerilla warfare. They are also encouraged to read about and absorb propaganda from some of the world’s most notorious Nazi and eco-fascist perpetrators.

[i] Special thanks to ACTRI Research Fellows for collecting data on Telegram.

[[viii]] Darby, L. (2019). “What is Eco-Fascism, the Ideology Behind Attacks in El Paso and Christchurch?” available at https://www.gq.com/story/what-is-eco-fascism.

[[xii]] Maria. (2019). “The Story Behind the Pine Tree Flags of the American Revolution,” available at https://www.gettysburgflag.com/blog/the-story-behind-the-pine-tree-flags-of-the-american-revolution/.

Share
Facebook
Twitter
Linkedin
Email
Previous articleAn Insider Perspective: What the Internet Means to UK Jihadists
Next articleCOVID-19 and Illicit Trade: When Organized Crime and Terrorists Profit from the Pandemic