EXCLUSIVE – Leading in a World of CBRNE Threats: A Q&A With Brig. Gen. JB Burton 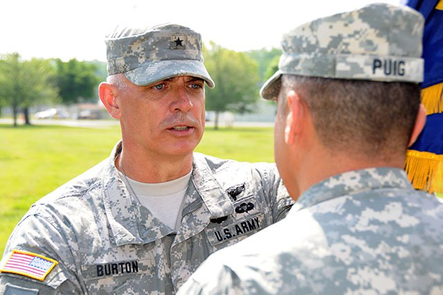 The spread of the Islamic State of Iraq and the Levant (ISIL) throughout Iraq, Libya and elsewhere in Africa, and the ongoing civil war in Syria increasingly evidences that tactical chemical agents are being employed on the battlefield. As ISIL recruitment efforts continue to inspire terrorists to arms domestically, in Europe and throughout the Middle East, the threat to the homeland is rapidly expanding.

In an upcoming exclusive interview with Homeland Security Today, Brig. Gen. JB Burton, the commanding general of the 20th Chemical, Biological, Radiological, Nuclear and Explosives Command (CBRNE), discusses his command’s approach to developing a "persistent stare" amid CBRNE hazards around the world.

In the interview, Burton highlights the fact that CBRNE threats and hazards — in a changing and increasingly complex security environment — can be impacted by local events that often have global consequences.

Burton is the 5th commander of the US Army 20th CBRNE Command, which he assumed command of on May 29, 2013. As commander of the Army and Defense Department’s sole CBRNE organization, he is responsible for manning, equipping and training more than 5,300 soldiers and civilians assigned across two Explosive Ordnance Disposal Groups, one Chemical Brigade and a CBRNE Analytical and Remediation Activity. Previous to taking command of the 20th CBRNE Command, Burton served as Deputy Commanding General for Maneuver of the 2nd Infantry Division in the Republic of Korea.

As part of the upcoming interview in the April/May issue of Homeland Security Today, Burton was asked to provide insight into his particular leadership style, specifically to better understand how he approaches challenges facing his command and balances the demands of both his domestic and global responsibilities.

Can you provide a vignette on good leadership – something, some instance, or some words of advice you heard, witnessed or endured that resonates with you today?

I have witnessed tremendously capable leaders at every assignment throughout my career, and I have been blessed to have been given the opportunity to serve in incredible formations, with exceptionally talented people, both uniformed and civilian, and I remain blessed to be surrounded by great leaders and great soldiers and civilians at the 20th CBRNE Command.

What is it that drives an individual to volunteer for military service?

I have always held to the belief that people sign up for the Army, and choose the military occupational specialties they do, because they want to be a part of something important, something bigger than themselves, members of a team that they can positively contribute to, and be recognized for, their contributions.

As an all-volunteer military, the choice for joining is an individual decision. Why do you believe individuals pursue it?

I am convinced, after more than a few years in this business, that no one signs up for the Army because they want to be thrown out for bad conduct. I am certain that this perspective holds true with most any organization—military, corporate or small business. People genuinely choose to do what they do, because they want to be part of something that they feel is important and because it is something they enjoy doing.

What advice would you give to a junior officer or an enlisted member of the Army if they asked you how to become an effective leader?

A question such as "Who are you, what do you do, and why is that important," is a great litmus test in understanding the character of an organization and the individual member’s understanding of, and commitment to, the organization.

I truly believe that high performing organizations require a commitment – true commitment – to the organization that resonates in the hearts and minds of every member, based on a wide understanding of the vision, the objectives and the individual’s role in the larger picture in order to contribute to their fullest potential.

Why is providing a foundational understanding of the organization’s vision so imperative to successful leadership from within?

Providing a foundation that creates an understanding of the organization helps to build the necessary level of commitment at the individual and collective levels that can really turbo charge performance. There is nothing worse than having no idea where you are going, or how you are doing to get there. That’s the role leadership must fulfill – vision, purpose, and direction, along with the resources necessary.

Can you provide an example of poor leadership you endured in the Army – as part of an assignment, duty posting or etc.?

I can honestly say that I have never had a bad duty assignment. That’s not to say that I haven’t had tough duties, but I have been blessed to find myself with a supportive family, and surrounded by greatly talented people, with what I call the right amount of "want to and can do."

The "want to/can do" distinction is interesting, can you expound on that idea for the benefit of emerging and aspiring leaders?

I like to characterize folks into two different tribes. The "want to and can do" tribe, and the "you can’t" tribe. The titles are self-explanatory, and they are out there in every walk of life I am sure. Sometimes moving folks from the "you can’t" tribe into the ‘want to’ tribe takes a significant emotional event.

In this business, the 20th CBRNE Command has undertaken an extremely aggressive training regimen at the individual and collective levels in partnership with Army and Joint formations, at home station and at the Combat Training Centers in order to advance a concept of operations that we believe is about right.

Placing our leaders and their personnel into these tough situations has demonstrated that they can effectively operate within a very complex mission area, while adding value to the supported formation or agency’s activities. Putting our folks and our formations into some pretty complex and challenging situations has allowed us to grow exponentially as a command, and I believe that has had positive effects to the lowest echelons in this command.

How does a successful leader transform or inspire individuals to migrate to the right tribe?

Dialogue is key and communications must be two ways, at a minimum. At best, it is multi-directional, inside and outside the unit. The give and take of human dialogue is required in any successful organization.

I have seen leaders that were outcome oriented, and from an external perspective, performed very well. In some cases, their performance was lauded as a model to follow. Unfortunately, when you looked inside some of those formations, and checked out the back trail you found a lot of broken glass, broken spirits, fear and disrespect.

On the other hand, I have witnessed organizations where the unit’s mission was fully internalized by the team members, and where the leadership enabled an open dialogue over matters of importance. I have seen junior ranking enlisted personnel, explaining their perspectives to much senior commissioned officers, on how to solve tough challenges. Those formations excelled, not solely because of the open dialogue, but because the organization’s members felt they had a voice in the direction of organization, that their perspectives were valued, and they were empowered to ‘follow their gut.

Whether their views on the challenge were ever fully implemented or not, was not at issue. What mattered was their inclusion in the dialogue, and that senior leadership was willingto listen to their views.

Some leaders assert that self-awareness is a vital component in the formation of a successful leader. What are your thoughts as to what is key to being an effective commander?

Leaders have to realize that "it’s not about them," it’s about the mission, the unit, and the unit’s ability to accomplish the mission. Leaders must understand that the unit is made of people and stuff. Both demand attention, and maintenance to ensure they are able to perform at maximum capacity. Maintenance of the stuff is relatively straightforward; we have technical manuals and trained mechanics to ensure the stuff works, as it is intended.

The people in the organization though are what are most important. With the people informed and committed to the success of the unit, they share an understanding of the vision and the organization’s purpose. When the people are well trained, empowered with the authority to make decisions at the appropriate level to achieve success, and resourced with the tools necessary for success, then magical things will happen.

People will cling to that. They will invest in themselves into that. Not all—there will be outliers. Most people want to be part of something special, something bigger than themselves, and they are proud to be a part of that something. And that there something – matters.