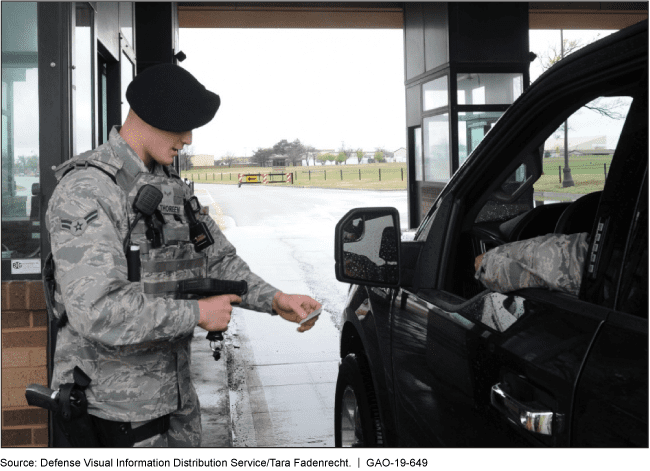 A Government Accountability Office (GAO) review has concluded that the Department of Defense (DOD) is unaware of the extent to which physical access control systems (PACS) are used at its installations because the Army, Navy, and Marine Corps have not monitored their use at more than 100 sites.

In November 2009, an Army officer shot 45 people at Fort Hood, Texas. Four years later, a Navy contractor shot 16 people at the Navy Yard in Washington, D.C. As a result, DOD increasingly uses PACS to screen people who want to enter military installations. The systems scan credentials and check them against FBI and other government databases.

DOD has issued guidance on accessing its domestic installations and strengthening PACS. The department has recently issued guidance directing the fielding of PACS and has fielded or plans to field such systems at domestic installations. The Defense Manpower Data Center (DMDC) developed the PACS used by the Air Force, the Navy, the Marine Corps, and the Defense Logistics Agency (DLA). The Army developed its own PACS. Both types of PACS electronically connect to DOD’s Identity Matching Engine for Security and Analysis (IMESA). IMESA accesses authoritative government databases to determine an individual’s fitness for access (i.e., whether an individual is likely a risk to an installation or its occupants), and continually vets this fitness for subsequent visits.

GAO’s August 22 report details the Army and DMDC’s tiered approach and notes that they have established helpdesks to address PACS technical issues such as charging and connectivity problems. The Army has also established performance measures and goals to assess its approach, which has improved the ability to resolve technical issues.

The review’s recommendations including monitoring installations’ use of PACS and developing appropriate performance measures and goals for resolving technical issues to improve PACS performance.

DOD concurred and stated that it is currently drafting a manual volume which will outline the overall requirements for implementing the PACS security program including monitoring the use of the systems. It is expected that this will be ready for use in the summer of 2020.

Share
Facebook
Twitter
Linkedin
Email
Previous articleCanada Invests to Counter Far-Right Extremism
Next articleWomen Planned to Build Explosive Devices Similar to Those Used in Prior Attacks in the U.S.