ISIS Claims Escalating Use of Wildfire Arson as Terror Tactic 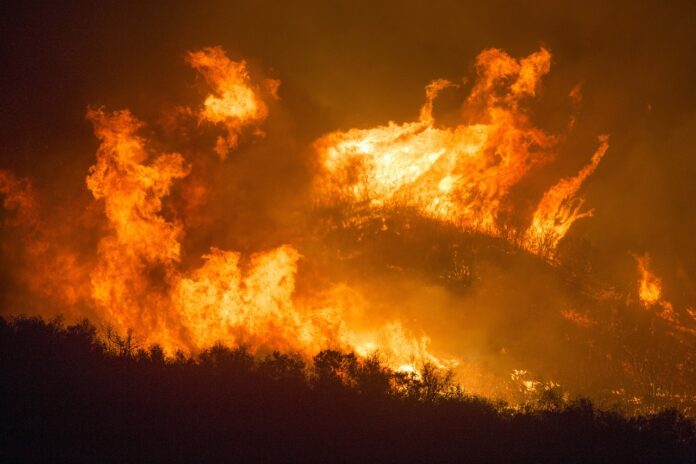 Long promoting the use of arson — both of occupied structures and of tinder-dry wildlands — as a cheap terror tactic that requires little skill but can inflict immense fear and harm, ISIS claims the terror group is behind a series of wildfires in Iraq and Syria.

In the group’s official weekly newsletter, al-Naba, ISIS said the targets were “apostates” whose “hearts have long been burned” and vowed the blazes are “just the beginning.”

ISIS also emphasized the economic impact of the fires, noting “many agricultural lands have been destroyed” and “tons of crops,” including wheat and barley, went up in flames in the jihadists’ “harvest of another kind.”

ISIS has officially claimed responsibility for a series of fires that burned hundreds of acres of farmlands in Iraq and Syria over the last few weeks
Here are #Sentinel2 🇪🇺🛰 images acquired on 23 May in Syria’s Aleppo and Homs Governorates showing wildfires that could be related pic.twitter.com/vImJusTpBg

— Middle East Center for Reporting and Analysis (@MidEast_Center) May 24, 2019

ISIS noted at the beginning of the al-Naba article that it’s summer; terror groups, in encouraging the use of wildfire arson in the past, have stressed that picking dry, hot, windy weather will intensify their efforts.

Iraq’s Civil Defense Directorate said Monday 6,103 acres of farmland had burned in 136 separate fires over the past 18 days, spanning 11 provinces. The statement did not confirm nor deny ISIS’ claim of responsibility, but the provinces most harmed — Salahuddin, Nineveh, Kirkuk, Diyala — correspond with areas already suffering under ISIS’ escalating guerrilla campaign that has included kidnappings and murders.

“ISIS entered the village of Palani, where parts of my family belong, threatened farmers that they would need to pay taxes to prevent their grain fields from being set on fire,” tweeted Kamaran Palani, a research fellow at the Middle East Research Institute, on May 21. “The men don’t sleep at night defending the village & the women come back to the village during the day.”

In Syria, farmers in Deir ez-Zour blame ISIS for setting wildfires and have been calling for more protection for their lands; ISIS claimed blazes in Al-Hasakah province, also along the Iraqi border. Syria Civil Defence, or the White Helmets, says the regime shelling of Khan Sheikhoun has sparked wildfires, while Assadists on social media have been accusing the U.S.-allied Syrian Democratic Forces of torching agricultural land.

In the al-Naba article, “Roll Up Your Sleeves and Begin the Harvest — May Allah Bless What You Reap,” ISIS reminded “soldiers of the caliphate” that they “have before you millions of acres… their plantations, fields and homes, as well as their economic foundation” to burn.

A fire was extinguished in Ja’aber, near Tabqa. But not after causing significant damage to crops. pic.twitter.com/ULUePGYeaA

Western Ninevah today & the crops, mainly wheat and barley, are on fire. pic.twitter.com/f42drqT1C2

In threats directed at the West, ISIS and al-Qaeda have linked their calls for wildland arson to devastating fires occurring at that time, stressing to supporters that they can wreak similar havoc by intentionally sparking blazes as their method of jihad.

“O america, This is the punishment of bombing Muslims in Syria,” stated a November threat from ISIS supporters that circulated online with an image of the California wildfires. “This is Allah’s punishment for you. And in shaa Allah, you will see more fires.

At the time, official ISIS media also highlighted the damage and death toll of the wildfires in multiple issues of al-Naba.

In January 2017, ISIS’ now-defunct Rumiyah magazine told would-be jihadists that “incendiary attacks have played a significant role in modern and guerrilla warfare, as well as in ‘lone wolf’ terrorism,” and said wildfires around Israel that month “demonstrated the lethality of such an effortless operation.”

Jihadists were advised to time arson attacks “preferably in the later part of night to the early hours of morning when people are generally asleep,” and were instructed how to block off exits in an effort to increase casualties. ISIS also specifically addressed wildfires, telling operatives to look for dry brush “as fire cannot endure in damp or wet environments.”

Also during last year’s California wildfires, supporters of al-Qaeda — which has a lengthy history of promoting wildfire arson — circulated news photos from the blazes with the Quran verse, “They will question you about the mountains. Say: ‘My Lord will scatter them as ashes.'”

A tutorial in a 2012 issue of al-Qaeda in the Arabian Peninsula’s Inspire magazine highlighted the damage caused by various wildfires and instructed jihadists on picking optimum weather conditions for arson and where to set a blaze to inflict maximum devastation.

“In America, there are more houses built in the country sides than in the cities. It is difficult to choose a better place other than in the valleys of Montana where the population increases rapidly. In the year 2000, a fire that is considered to be the biggest in the American history flared up in one of those valleys. It spread in a space equal to that of London. The fire burnt down 70 houses as well as a hundred car. On July of the same year and in the same place, a thunderstorm lighted 78 massive blazes in just one day, most of them were deadly firestorms,” the “Open Source Jihad” article said.

“We mention such examples only to show the magnitude of the destructive impact that fires or firebombs make, to then ask the question: Is it possible for us to cause a similar destructive impact using a similar weapon? The answer is: Yes, it is possible. Even in a shorter time and with much bigger destructive impact,” the Inspire tutorial continued, offering a step-by-step guide on building an “ember bomb” with a timer to spark a conflagration.

“The most important damaging result… is the spreading of terror among the targeted community,” al-Qaeda said.

The National Interagency Fire Center said in its May outlook that, at the peak of the U.S. fire season expected this upcomin August, major influencers will be a “heavy crop of grasses and fine fuels” across California along with moderate drought in the Pacific Northwest.