A new video from the Islamic State’s media wing tells followers that arson is the highest-rated of the low-skill terror tactics and encourages fire attacks with the devastation and death toll of the 2018 Camp Fire in California highlighted as an example.

The 4-minute video “Incite the Believers” issued by Al-Hayat Media Center, released in both English and Arabic, shows items such as a power drill and a handgun while noting that would-be jihadists may “look around yourself and you do not find a weapon that you can use to subdue the enemy of Allah.”

It shows ISIS publications including Dabiq magazine and the weekly al-Naba newsletter — only the latter is still published — that have included calls for lone jihadists to act or offered tactic tutorials. The video also shows scenes of past attacks including the Orlando mass shooting, stating that followers are “eager to fulfill” calls to jihad “but you cannot find a way to achieve that.”

“We are sure that if you knew how and found a weapon you would not delay in fulfilling your duty to support the Muslims and do jihad,” the video continues, urging followers to “look around yourself again, keeping an eye for a solution and not searching for a problem” as they sort through “all the means to kill and destroy.”

“Consider which you can use easily and without drawing attention to yourself and making the result be death, destruction and heavy losses to the enemies,” the narrator states. “Yes, my brother, it is that weapon which is within reach of every hand and even children are proficient using it, and people have used it since ancient times to harm their enemies — yes, it is fire.”

“To become more convinced of this option try looking for the losses caused by fires in the lands of the crusaders every year — fires in forests and fields, cities and villages completely destroyed, people displaced, armies of firefighters and civil defense personnel working continuous days to no avail,” the narrator continues, noting that death tolls in major blazes sometimes “exceed the number of those lost in major strikes by the mujahideen in which they used guns and explosives.”

Examples of death tolls are displayed for wildfires in Australia, Greece and California — specifically, the death toll of the 2018 Camp Fire that destroyed most of the town of Paradise. That blaze was sparked by a faulty power transmission line.

Tactically, the video advises would-be jihadists to “monitor well for a place where you can set a fire without drawing attention” and “consider that the fire will be so great that efforts made to extinguish it will cost your enemies greatly and perhaps they will not be able to put it out” before it spreads out of control. 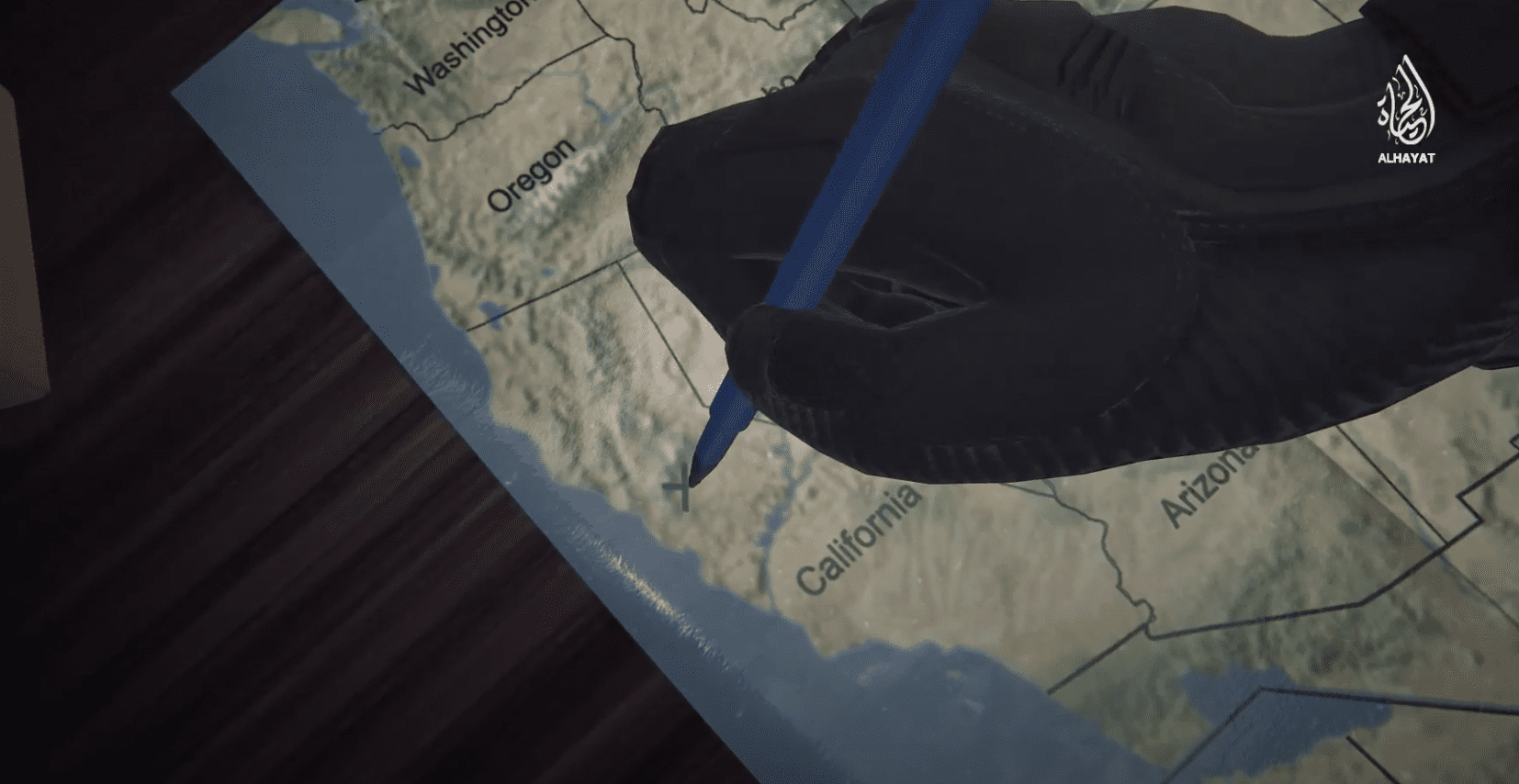 The video shows animation of a hand marking a spot on a map between San Francisco and Sacramento. The graphic then lights on fire, burning through the California map.

The video also urges arson jihadists to “safely dispose” of evidence after fleeing the scene of their attacks.

A target map at the end of the video suggests forest fires in the western United States, factory blazes in Canada, burning buildings in Europe, and agricultural fires in South America.

ISIS has long promoted arson as a cheap and easy terror tactic, and has put those threats into action in Iraq and Syria – taking advantage of warming temperatures in spring to set natural fuel alight with the intent of sowing fear, economic pain and potentially casualties. ISIS previously claimed in May 2019 that the terror group was behind a series of wildfires: In the ISIS newsletter al-Naba article, “Roll Up Your Sleeves and Begin the Harvest — May Allah Bless What You Reap,” ISIS reminded “soldiers of the caliphate” that they “have before you millions of acres… their plantations, fields and homes, as well as their economic foundation” to burn.

A 49-minute video released this May by the terror group, “Strike Their Necks,” features ISIS-shot footage of guerrilla-style attacks on remote roads, terror training and executions – along with structure arson and nighttime footage of a small group of terrorists setting brush fires. Some Iraqi farmers reported that these were complex attacks: If they tried to go out and extinguish the flames in their fields, they could be attacked by terrorists lying in wait.

For terror groups and movements that are perpetually looking for low-cost, efficient, low-skill means of attack, arson presents an opportunity to inflict casualties and economic losses while keeping a community on edge about where the surreptitious fire-setting might happen next.

Arson lends itself to long-distance inspiration of lone actors who need only find simple encouragement online, incendiary materials and a vulnerable target. Arson is ideal for terrorists looking to hit soft targets such as a forest, where no one is guarding the perimeter. Arson is a prime tactic for the terrorist who doesn’t want to arouse suspicion by purchasing a firearm or who doesn’t have the know-how to build a complex explosive device (though as a white supremacist in Britain who tried to torch a synagogue found out, sometimes the arsonist sets himself on fire); they can even get a helping hand from nature if the land is parched during wildfire season or high winds pick up, and non-arson blazes pop up in terror propaganda in order to urge would-be terrorists to inflict similar damage. Arson achieves what al-Qaeda has repeatedly stressed is a core objective of its jihad: hitting the West in the pocketbook, with losses caused by wildfires in California alone estimated at $400 billion in 2018.

And if those weren’t enough reasons to heighten defenses against arson terrorism, the symbolism of large swaths of land, landmarks or critical infrastructure going up in flames feeds the narrative of accelerationist terrorist philosophies across the spectrum, groups and movements seeking societal collapse with their new world order arising from the ashes. ISIS, for example, has a two-part film narrated by an English-speaking westerner called “Flames of War.” The neo-Nazi Feuerkrieg Division means “fire war” in German, and a teenage member arrested last fall in the UK was accused of plotting an arson spree targeting synagogues as he vowed to journal his activities “from now all the way to the inevitable race war.”

With an eye on the danger of scorching summers, ISIS and al-Qaeda have linked their calls for wildland arson to devastating fires in recent history, stressing to supporters that they can wreak similar havoc by intentionally sparking blazes as their method of jihad.

Propaganda also recently has included a push for jihadists to target gas tankers and stations: “Targeting oil and gas transport trucks with accidental accident that causes the truck to overturn,” directed one poster last year from ISIS-supporting Quraysh Media, which also showed a calendar at the bottom of the page switching from 2019 to 2020. “Targeting gas stations by throwing a cigarette to look like an accident. Do a search for the presence of oil pipelines, and then burn them.”

In January 2017, ISIS’ now-defunct Rumiyah magazine told would-be jihadists that when planning and executing wildfire terrorism they should look for dry brush “as fire cannot endure in damp or wet environments.” The article added that “incendiary attacks have played a significant role in modern and guerrilla warfare, as well as in ‘lone wolf’ terrorism.”

Jihadists were advised to time arson attacks “preferably in the later part of night to the early hours of morning when people are generally asleep,” and were instructed how to block off exits in an effort to increase casualties.

During California wildfires in 2018, supporters of al-Qaeda — which has a lengthy history of promoting wildfire arson — circulated news photos from the blazes with the Quran verse, “They will question you about the mountains. Say: ‘My Lord will scatter them as ashes.’”

A tutorial in a 2012 issue of al-Qaeda in the Arabian Peninsula’s Inspire magazine highlighted the damage caused by various wildfires and instructed jihadists on picking optimum weather conditions for arson and where to set a blaze to inflict maximum devastation.

“In America, there are more houses built in the country sides than in the cities. It is difficult to choose a better place other than in the valleys of Montana where the population increases rapidly. In the year 2000, a fire that is considered to be the biggest in the American history flared up in one of those valleys. It spread in a space equal to that of London. The fire burnt down 70 houses as well as a hundred car. On July of the same year and in the same place, a thunderstorm lighted 78 massive blazes in just one day, most of them were deadly firestorms,” the “Open Source Jihad” article said.

“We mention such examples only to show the magnitude of the destructive impact that fires or firebombs make, to then ask the question: Is it possible for us to cause a similar destructive impact using a similar weapon? The answer is: Yes, it is possible. Even in a shorter time and with much bigger destructive impact,” the Inspire tutorial continued, offering a step-by-step guide on building an “ember bomb” with a timer to spark a conflagration.